14th Street is a major East/West artery in downtown New York City. The “L” train, once known as the “LL” train, runs below 14th Street, then it continues to Brooklyn and greater glory. You can only stop at a few places, though, when you take the L Train. The M14 Bus runs on the actual street and it will stop at almost every intersecting avenue. When I discovered, though, that the M14 covered more than just 14th Street, it won me over.

There are two M14 buses. Actually, there may be 3, or there may have once been three, but I’ll confine this brief discourse to the M14A and the M14D. The “D” variant runs from the Chelsea Piers, hits 14th Street, then runs all the way east and makes a turn south on Avenue D. I first discovered this bus line in the early 1980’s. One dark, sunny day back then, in place of a ripped-out bus poster, someone had scrawled with a wide-tip Sharpie “Avenue D is the end of the world.” Truer words were rarely uttered or scrawled, especially back then. Even in the haze that surrounded me then, I was able to ponder those words and what they meant to my life. I eventually had no business left on Avenue D and stopped riding that line.

In the 90’s, though, and I don’t know how this knowledge had eluded me until then, I discovered that the M14A ran all the way up Avenue A, across 14th Street, and then DOWN Hudson Street, to finally park in front of the Bus Stop Cafe in Abingdon Square. This was almost like having my own personal limousine. I could eat at Kate’s Joint, now gone, go grab a bus on Avenue A, and be home a pleasant 35 minutes later, all the while reading a magazine or a book and enjoying the company of my fellow New Yorkers. I have happily ridden this line ever since. In fact, in the oughts, from about 2005 till 2009, I had occasional business at the far eastern end of Grand Street, where I discovered the far eastern terminus of the M14A. I could now ride from end to end on this odd bus line, getting the most value out of my fare and enjoying even more time reading and co-existing with my fellow New Yorkers. I started thinking of it as the corporate bus for my company at the time. In fact, I even bought the domain name “m14a.com,” which I still proudly own. I don’t do much with it, but it’s one of those rare 4-character domain names that might one day be my ticket to a house in Hawaii. I’m sure somebody, somewhere, one day will want to give me a lot of money for “m14a.com.” 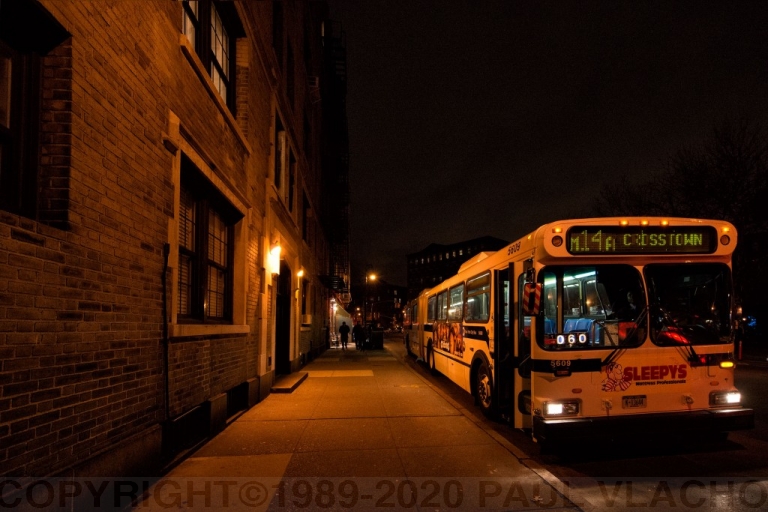